June was coming to an end and still nothing was happening with the container ginger. I thought it was never going to sprout. Then this past week I saw little green poking out of the soil. Yes. Finally something is happening, I was excited. 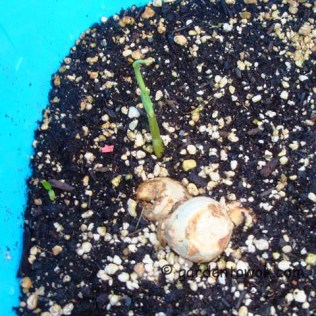 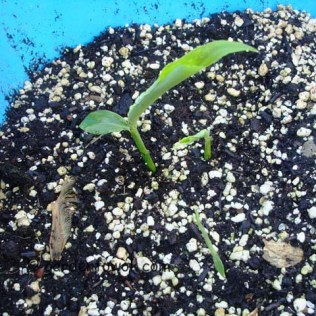 Now that sprouts have finally appeared and we are having nice hot weather they will be growing at a much faster rate, I hope. 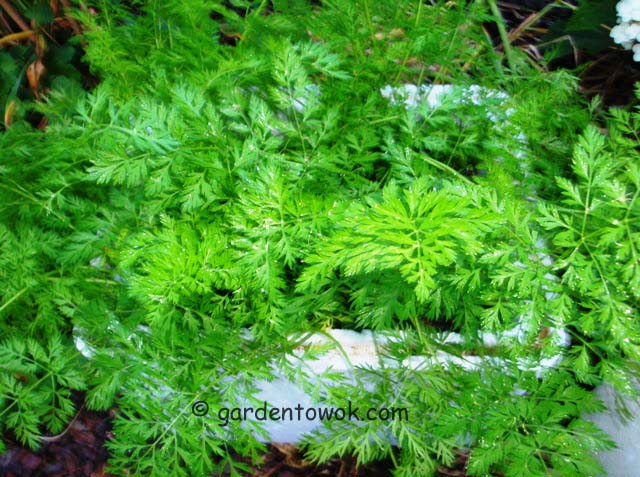 The first thinning, there were signs of carrots forming. The second thinning, about 2 weeks ago, produced edible pencil-sized carrots.

Check out the thumb-sized carrots below from the third thinning of a few days ago, they were sweet and crunchy. Will continue to thin/harvest as needed for the table. I see a nice long harvest season.

Mokum Carrot with its sweet crunchy texture is now my favorite. So very easy to grow in container. Started another container this past week.

Had some tiny onions left over from last year’s harvest so decided to plant them in a foam chest just for fun. Look at them now! I think the one on the upper right weighs more than 6 ounces (must remember to weigh after I harvest). Yes, there is over crowding, must pull some to give others room to grow, hope its not too late.

Needed onion for a dish, pulled the 2 below (they were showing signs of bolting) from the above container . 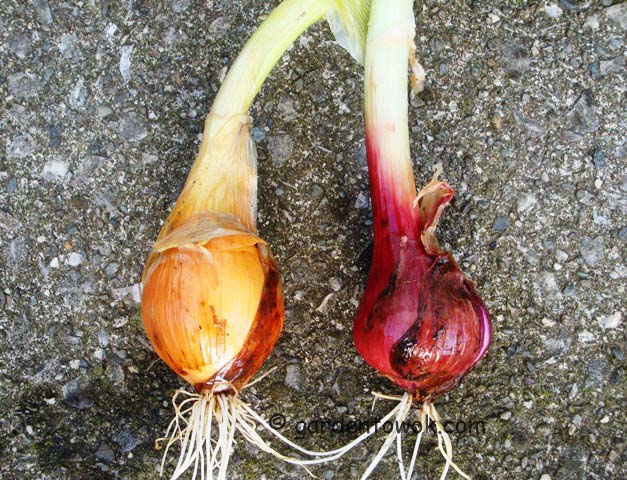 Wish I knew the names of the above onions.

Last of the spring planted lettuce. 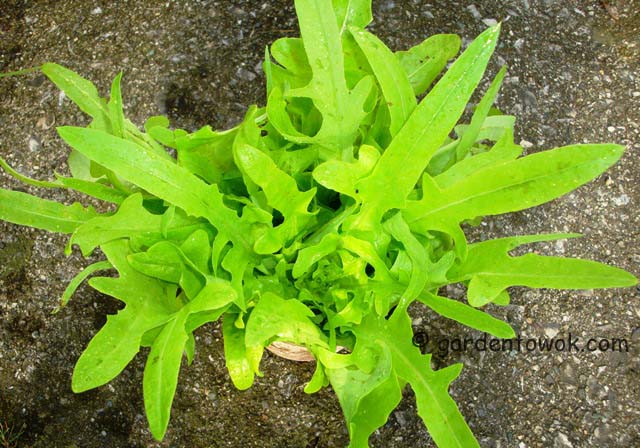 The above Oak Leaf Lettuce made a lovely salad with a simple lemon and EVOO dressing.

Below are 2 of the harvests from the garden that were not camera shy:

Going to be a nice HOT week, all the heat loving crops will be happy and grow by leaps and bounds.

Container Fig tree is loaded with figs. There is a fig at the base of just about every leaf. 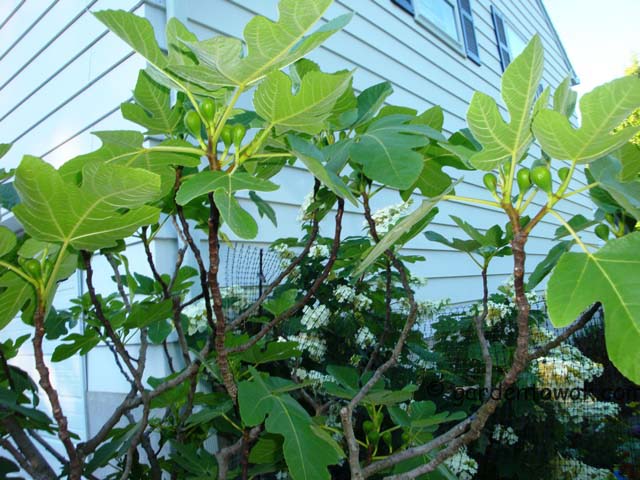 This is going to be a great fig year! I am guessing there are hundreds figs on this one tree.

Look at those beauties in the above photo!

Vines of the container Little SnapPeas Crunch are loaded with pods.

Harvested about 1 pound from the above container so far. Used some in a chicken stir-fry, the pods were sweet and crunchy. 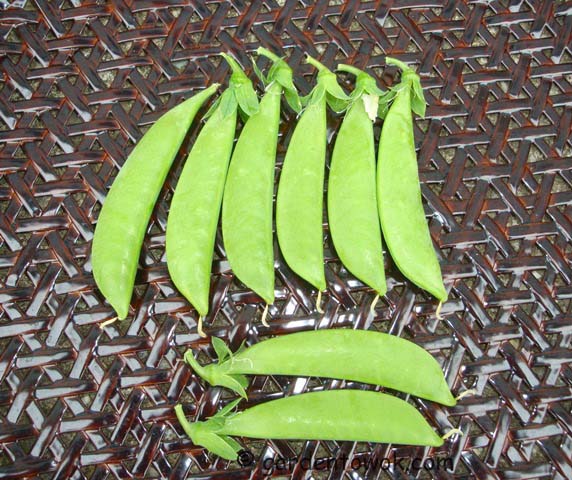 Little SnapPea Crunch is becoming my favorite snap peas, easy to grow and very container friendly. According to the seed package the vines are self-supporting but I find staking them makes it easier to harvest the pods.

For fall planting, direct sowed Little SnapPea Crunch seeds in a foam ice chest. Also started some seeds in a container (strawberry containers are great for starting seeds) just in case some of the seeds in the ice chest fail to germinate.

Harvested the garlic scape from the container garlic. Cut into about 1″ length and added to the chicken stir-fry with the SnapPea. 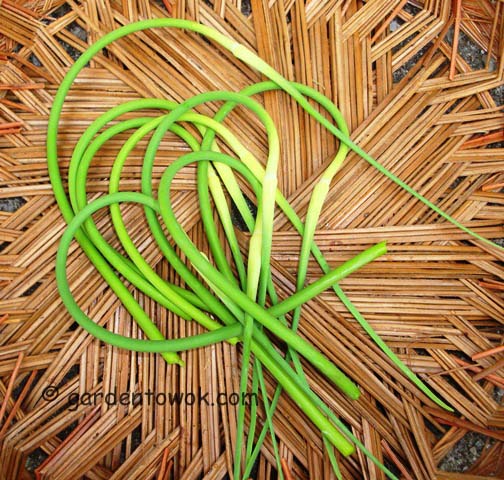 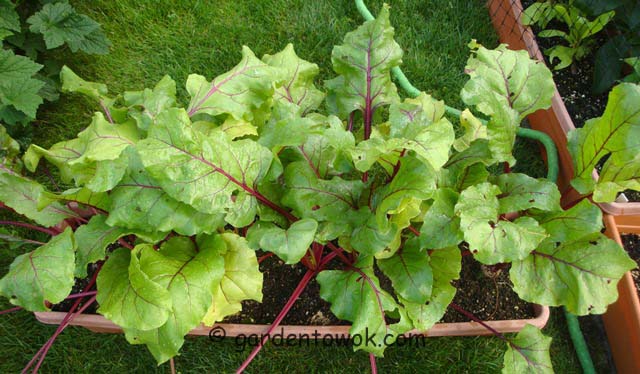 Should harvest some of the leaves. Stir-fry with some garlic scape for a delicious side .

Lettuces on the other hand are bolting, will pull all the plants today or tomorrow. May not be salad material but stir-fry briefly in garlic infused oil will mellow the slightly bitter taste resulting in a delicious side.

Am starting my fall planting 2 weeks earlier this year.

Weeds are growing exceptionally well, will be spending lots of time and energy trying to get rid of them. Going to be a busy week.

I have read about starting sweet potato slips in potting mix instead of in water (which I have always done) and decided to give this method a try this year.

Will there be any differences in sprouting?

To find out, on March 17, I placed one Purple Sweet Potato in water and another in potting mix. The SP in water sprouted earlier than the one in the potting mix, unfortunately I neglected to note the dates. 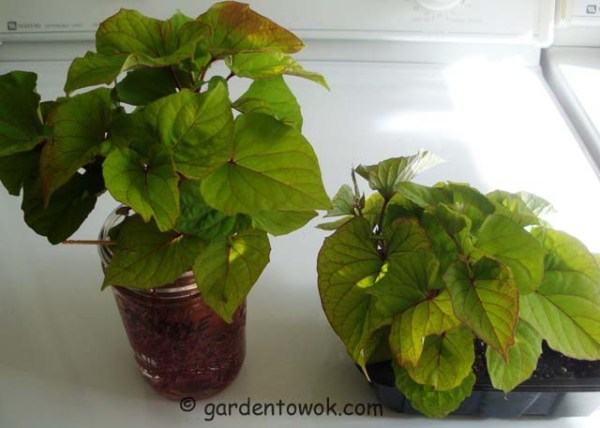 Will there be any differences in yield?

Transplanted all sweet potatoes slips into the garden on Wednesday, 5/24, as rain was predicted for Thursday, 5/25, to be followed by 2 cloudy days.

And rain it did. Plants are happy so are the weeds.

Was only going to plant 2 varieties this year – Purple and Ginseng Red. But Mary gave me 2 slips of Wilma’s (a new variety for me) so now I am growing 3 varieties.

Cut chard, stems and leaves, into bite-sized pieces, combined with thinly sliced garlic greens, and stir-fried briefly in a bit of oil, salt & pepper to taste. Garden to wok in less than an hour.

Also transplanted my Chinese Long Beans seedlings. Seeds were started in containers instead of direct sow.

The week of May 8 we had a few nights where temperature was in the 30’s°F. 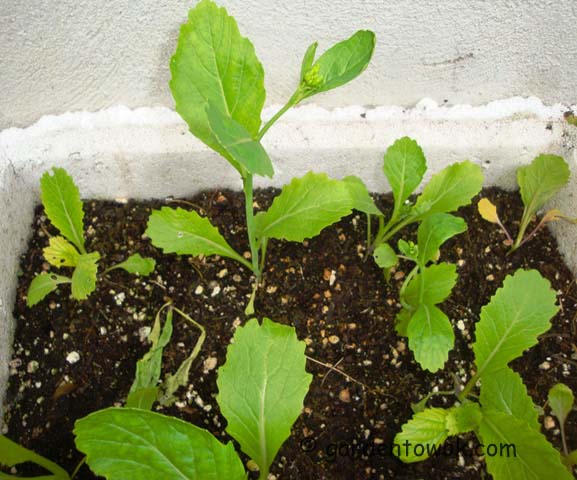 However, the Toy Choi Hybrid I started 3/19/17 and transplanted into window box on 4/26 did not bolt.

My guess is the Toy Choi had passed the seedling stage therefore hardier and able to withstand temperature below 50°F.

Tomatoes I took a chance and transplanted on 5/12 all survived and are doing well.

Speckled Roman Paste is one of my favorite tomatoes. Good for making sauce as well as for slicing.

Both the German White and the Duganski are hardneck garlic. Looking forward to harvesting garlic scapes in a couple weeks.

In her comments on last Monday post, Kimberly Brandt ask for a photo of the Goji aka Wolfberry plant.

The above photo is for you Kim.

Last of my tree peonies. Deciduous peonies should be blooming any day now. 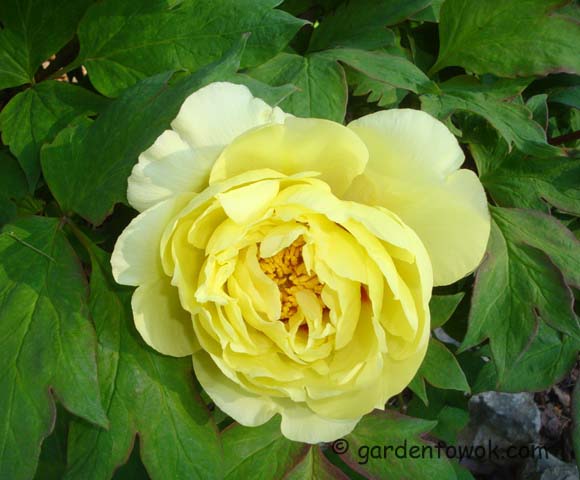 It was sunny when I took the above photo so the color is a bit washed out.

This is the last thinning of my over-planted garlic, now I will wait for garlic scapes to appear, which should be around mid-June. 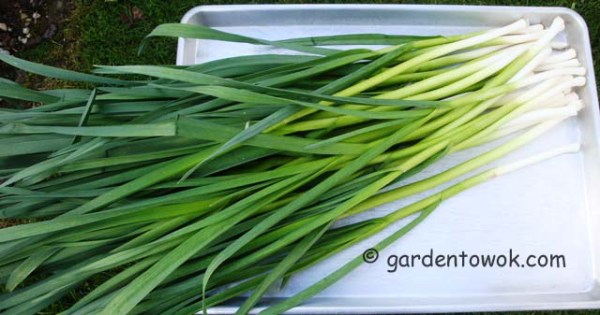 There are 20+ garlic plants in the above photo, thinly sliced a few (white and green parts) and added to a chicken stir-fry, delicious. Also used some as scallion substitute in a Fried Rice.

With so much garlic green on hand decided to experiment with freezing. 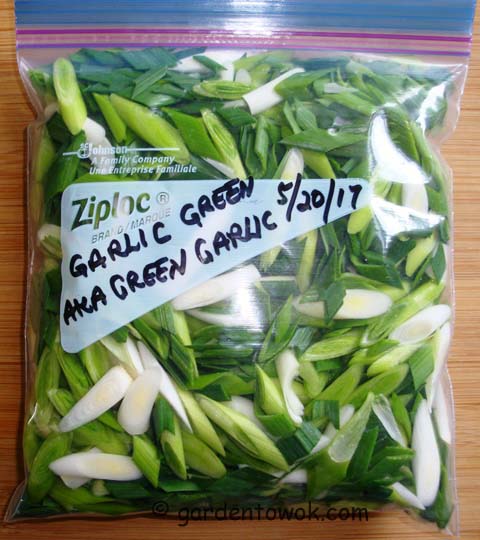 To freeze, this is what I did:
• Removed and discarded roots and outer layer of garlic green/green garlic
• Washed well and drained
• Thinly sliced, white and green parts, placed in freezer bag, date, label and freeze

In future cooking, if a dish requires a mild garlic flavor I can just toss some in .

My Goji (wolfberry) plants continue to do well and friends love to stop by for the leaves. They keep telling me how delicious it is and how good it is for ones health, and, keep encouraging me to give it a try (I did try to make soup as they recommended but did not care for it).

Decided to give it another try with the young tender spring leaves. The verdict: Liked it. The leaves were tender, delicious and mild flavor.

I added the leaves to chicken broth, simmered for a few minutes then stirred in beaten eggs, that’s it, simple and delicious (like Italian Stracciatella soup sans cheese). Definitely making again and may add sliced chicken or pork for a more substantial soup. Will also try stir-frying, can be used in salad as well.

(Previously I was using the mature leaves that had a slightly bitter/medicinal taste and came to the conclusion it is an acquired taste which I have not yet acquired.)

Wondering if there is any difference in health benefit between the young spring leaves and the more mature leaves?

Another advantage with the young spring leaves there is no thorn on the stems making it much easier to strip the leaves from the stems.

I was told the leaves freeze well so will freeze some for future use.

Monstrueux de Viroflay Spinach ready to harvest. The germination rate was poor, about 50%, not sure if it was due to weather or because I was using last year’s leftover seeds.

Though huge, both the leaves and stems, cooked or uncooked, were tender and delicious. Am going to try to grow a fall crop.

Transplanted my hardened off celeriac and leeks. Got carried away and decided to take a chance and transplanted some of the hardened off tomatoes. Fingers crossed, hope we do not get frost.

Sweet potato beds prepared. Wednesday’s temperature is predicted to be 87°F and Thursday to be 90°F. By weekend the soil should be warm enough for me to plant my sweet potatoes slips.

Visited a nursery on Wednesday and purchased quite a bit of annuals. Planted all. They are supposed to be deer resistant but of course there is no guarantee, just hope the deer stay away.

My harvest was similar to the previous week, lettuces, garlic greens, walking onion, kale, photos would be pretty similar, so decided to post photos of my tree peonies instead.

The tree peonies are just gorgeous this year, the pink ones are the first to bloom (every day was a new surprise) followed by the purple, later will come the whites, the yellows and the reds. 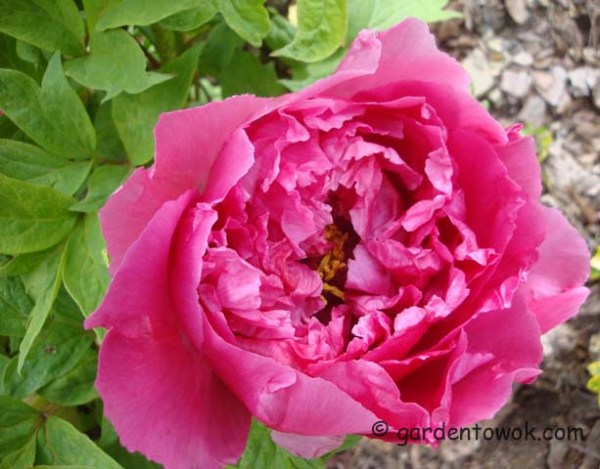 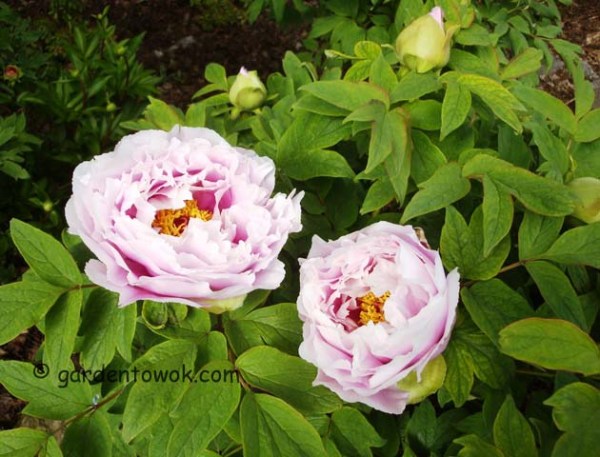 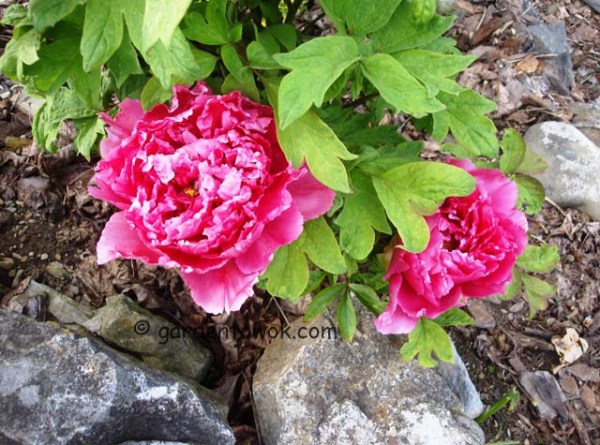 The tree peony in photo below is the same plant in last Monday’s post in full bloom (the plant is prettier than my photo).