Today’s container peppers are from my daughter’s sunny patio. For some unknown reason peppers do not grow well in her garden. Two years ago (2014) I suggested she try growing peppers in containers and gave her 2 pepper plants in 2-gallon containers. She had very good results and decided to do the same again last year (2015) but using larger containers and that made a huge difference. She harvested enough peppers from just the 2 plants for all her needs plus extra to share with neighbors. 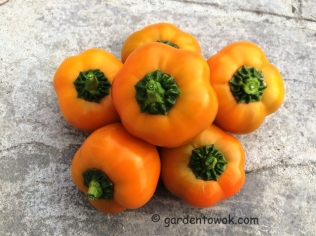 I emphasized that there be only one pepper plant in each 6.87 gallons (26 liter) container.

The above pepper seedlings are thinning from Locust Grove Heritage Vegetable Garden that I brought home and nursed.

At LGHVG, seeds are sown in cell packs, 2 seeds per cell. Seedlings are thinned to one plant before being bumped up into 3″ container and us volunteers are the beneficiaries of the extra seedlings from the thinning.

Both pepper plants are very happy and growing well on the patio where they receive full sun. The plants were kept adequately watered throughout the growing season and fertilized once a week with water-soluble fertilizer following package directions.

By planting only one pepper plant in each container, there was no overcrowding and both plants produced abundantly. My daughter did not buy a single pepper from the food market.

November and December, 2015 was unusually warm in the USA Northeast, there were a few below freezing and frosty nights during those months but because my daughter’s 2 pepper plants and one cherry tomato plant were in containers, she was able to bring them into the garage at night and take them out during the day. Having the foresight to place wheels under each container made it easy to wheel them in and out.

All the photos below were taken during December, 2015 in Massachusetts where my daughter lives.

Look closely at the lower right to spot the lone Doe Hill Golden Pepper. The plant did not produce any more peppers.

Jimmy Nardello, on the other hand, continued to produce and was brought indoor 12/22/15 for the remainder of winter. 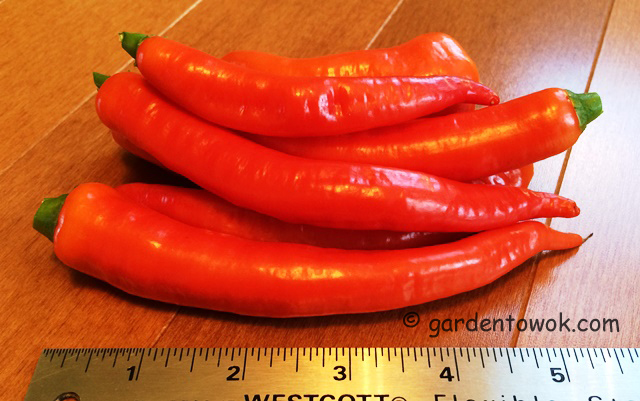 The cherry tomatoes were totally unexpected. She never got around to disposing the dying tomato plant left it in the garage and got a pleasant surprise!

Yep, those ripe cherries were tasty.

The lettuce bed was covered, every night, with GardenQuilt Covers from Gardeners Supply and uncovered during the day (the white roll between the raised beds is the cover). 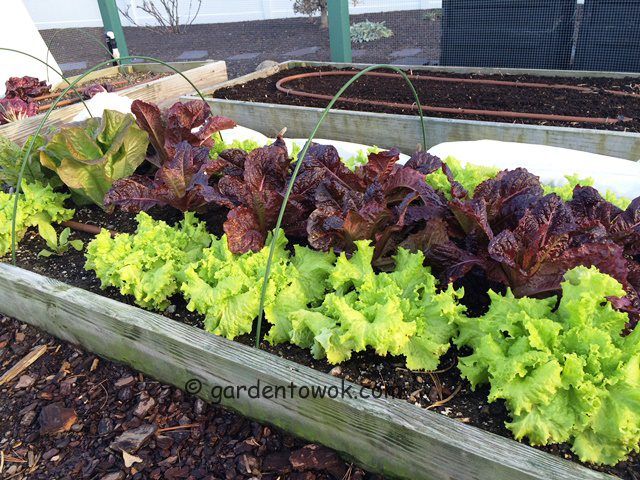 Look closely at the upper left corner to see 2 heads of radicchio.

Sure has been a very unusual gardening season and an extended one!