Amazing how hardy many crops are, below are photos of survivors (of the many frosts and hard freeze for the past weeks) in my garden. 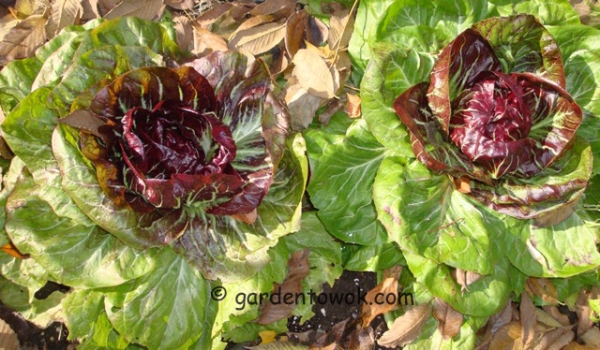 Hoping the above radicchio will form solid heads. The ones planted in May were eaten by woodchuck so I re-sowed mid-July in cell pack and transplanted into the garden early August. July sowing is a bit late but still hoping.

Pulled 6 celeriac, they were pretty good sizes. Shared with neighbors and friends who never had celeriac before but were willing to give it a try. Gave them ideas on how to use and they all loved it.

Parsnips are small, they never fully recovered from the damage done by the woodchuck earlier in the year. Leaving most of the plants in the ground and will mulch thickly with the hope that they continue to grow over the winter and by spring they will be larger. Parsnips are extremely hardy.

Will mulch thickly before the ground freezes and harvest as needed over the winter months. If we have a mild winter they will survive until spring, but if we have another winter like the last one I will surely lose some, taking a chance.

Kinda late in the season so the above napa may not form solid head, still usable, need to keep an eye on the weather and harvest before a killer frost.

The above were sown in mid-June and have formed nice roots. Trying to decide whether to pull all the plants now and store in the garage or take a chance, mulch and harvest as needed over the winter, beets are not as hardy as the parsnips.

The beets on the left are from LGHVGarden spring planting leftover seedlings. Was worried they would be woody but they were fine. The Lutz beets on the right was my second crop directly sown mid-June.

The above chards were directly sown mid-July. The Peppermint chard below were started in cell pack in March and transplanted to the garden in early May, leggy but still growing strong. Need to harvest all before a killer frost.

Parsley is pretty hardy, will leave in the garden.

Was most surprised to see so many Goji berries on the plant.

I allow some of the mustard plants to go to seeds and self sow, now I have 3 different varieties of mustard volunteers growing in the garden. All will be harvest before a killer frost.

Harvest over one pound of green and red mustard, all volunteers. These will go into the freezer for later use in soup.

Planted only one variety in the spring, some of the plants seeded and self-sow. Don’t know why, but now I have 2 different varieties of Ruby Streaks Mustard.

Had a few nice days and was happy to get my cell packs and trays washed, sterilized and ready for next year’s seed starting and spring planting. Now I can winterize my hoses.

Got my winter deer fences up, azaleas, mountain laurels, … are protected from foraging deer.

Did some pruning and weeding but still much to do. Pleasant weather is in the forecast for this whole week, nice treat, would be great if I can get all outdoor chores completed before the end of the week, working towards that goal.

Do visit Dave at Our Happy Acres for more Harvest Mondays