This past week I continued with fall clean up. Most of the flower and perennial beds are in good shape, weeded, mulched and ready for winter. Also pruned and shaped my fig tree (not sure if it is the right time) before wheeling it into the garage for the winter.

Today’s post I am focusing on bok choy I transplanted into window box on September 1.

I had thickly sown some very old bok choy seeds in the garden early August hoping some of the seeds will germinate. Will you believe most germinated and needless to say needed thinning. Transplanted the thinning into window boxes. Below is one of them. 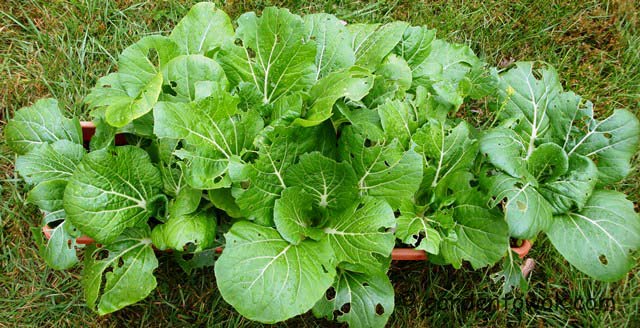 As you can see from the above photo, something is obviously enjoying my Bok Choy. May be I should give in and use a spray.

The Red Giant Mustard (all volunteers), about 1½ pounds, were harvested from the garden.

Still have lots of greens in the fridge that needed to be used so decided to experiment with oven drying the bok choy and mustard.

In Chinese cuisine, dried bok choy and dried mustard are used in soup.

Placed the blanched bok choy and mustard in a 200°F oven (with oven door slightly ajar to allow moisture to escape) for 4 hours. Below photos show the results.

Bok Choy after 4 hours in the oven

Bok choy after 4 hours in the oven at 200°F. The leafy part was dry and crispy but the stem part still had a bit of moisture, decided to leave the tray on the counter. After 2 days of air drying the stems were also dry and crispy. 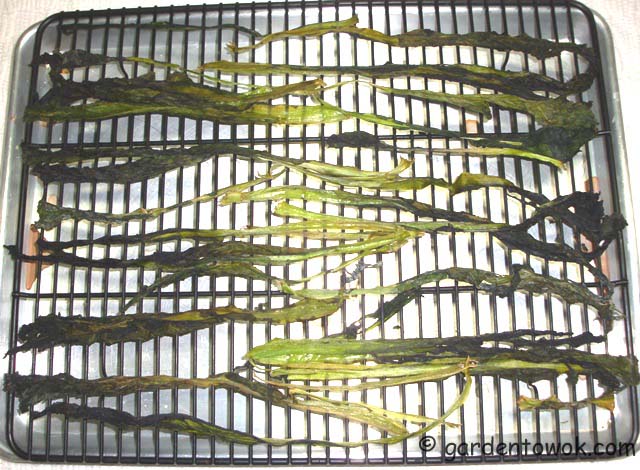 Red Giant Mustard after 4 hours in the oven

Red giant mustard after 4 hours in the oven at 200°F. Both the leafy part and the stems were dry and crispy. It appears given the same length of time and oven temperature the mustard dries faster.

After drying, 2 pounds of bok choy yielded about 4 ounces, 1½ pounds of mustard yielded about 3 ounces. Worth the time and effort not to mention electricity? Not sure. Packaged both in airtight container for later use in soup.

Some animals are digging into and overturning a few of my window boxes. The above is Shanghai Bok Choy.

After repositioning the Shanghai bok choy I moved the window box to a shaded location for a few days and gave the plants some liquid fertilizer to minimize the shock and help them to recover.

Does anyone know the name of the above Fall Blooming Daisy? A friend gave me a plant some years ago but she never knew the name.