Guinness World Record – Walkway Over the Hudson is IN

On April 4, 2012 I wrote a post titled Hokey Pokey Over the Hudson River. Organizers of Walkway Over the Hudson were seeking 3000 people to do the hokey pokey on the walkway on Saturday, June 9, 2012, to break the world record for longest single line of dancers set on June 14, 2008 in Audru, Estonia, where 2354 dancers performed the “toe dance” folk jig. (click on photos to enlarge.)

After many weeks of planning, the day finally arrived.

We, walkway volunteers, were instructed to be at the walkway entrance by 6:45 a.m. on the day of the event. Upon arrival we were given instructions and assigned positions. I was stationed at the east bump out. (There are 3 bump outs on the walkway. At the center bump out were the judge, VIP and media tents. Another volunteer was assigned to the west bump out.) I was given a cushy assignment, all I had to do was answer questions, know who to contact in case of problems and show people where the bottled water is. I even had a table and chair to sit and look pretty.

I decided to enter the walkway at the west entrance as parking is easier on the Highland side. It was drizzling when I left home, but cleared up shortly and remained cleared but overcast for the entire event which made it very nice and comfortable.

Participants started lining up at the registration check-in-table around 7:00 a.m. Once checked in, starting at 7:30, they went through the turnstile to be counted. Did not take long for the walkway to be filled with dancers from all walk of life and all ages, ranging from single-digit (kids) to triple-digit (mature adults) and all ages in between. One gentleman need the aid of a walker but that walker was not going to stop him from doing the hokey pokey for 5 minutes nonstop. You should see him move!!!!! 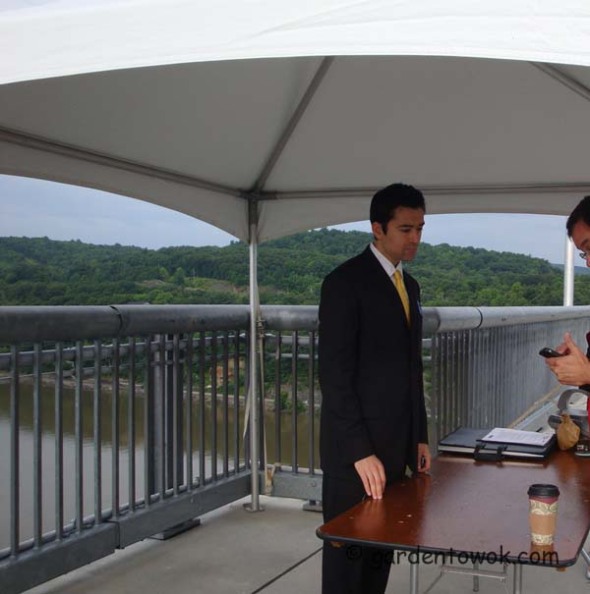 Guinness judge Danny Girton Jr. has arrived and is getting ready. He was the only person wearing suit and tie on the Walkway.

Live broadcast under the tent on the bridge. There was also a helicoptor circling overhead taking photos and making comments.

It was a really, really festive event, dancing feet were eagerly awaiting for the line-up announcement,  the crowd was more than ready. I am sure the helicoptor could hear the roar of the crowd each time it passes overhead.

Before 9:00 a.m. dancers were instructed to lline up on the north side of the walkway, there was a practice session. Then countdown started, 10, 9, 8, 7, 6, 5, 4, 3, 2, 1. Dancing started and everyone danced for 5 minutes nonstop (that was the entire length of the hokey pokey tune written specifically for the event). Volunteers and the judge watched to make sure everyone was dancing nonstop for the entire 5 minutes.

Many dancers brought radios and lined them up along the bridge (one is at the lower right hand corner of above photo) and tuned to AM 1390. When the countdown started everyone heard the message at the same instant, there was no delay.

Once the 5 mniutes was up, the judge did what he had to do to verify that we broke the world record, this took about 20 minutes. Before 10:00 a.m., the official announcement came that we broke the record, 2569 dancers did the hokey pokey for 5 minutes nonstop. (We actually only needed 2355 dancers to break the record.)

Of course all this could not happen without the sponsors.

You do the hokey pokey,
And you turn yourself around (turn to the right, one complete turn)
That’s what it’s all about (clap 3 times while singing this line).

And that’s what it was all about!

I am the author/publisher of 2 user-friendly Chinese cookbooks: "My Students' Favorite Chinese Recipes (updated edition)" and "Wokking Your Way to Low Fat Cooking" A gardener who enjoys cooking and eating and loves to think outside the box A garden volunteer at Locust Grove Heritage Vegetable Garden Conduct hands-on cooking workshops for teenagers Conduct cultural programs for children and family Conduct healthy cooking classes for adults
View all posts by Norma Chang →
This entry was posted in Uncategorized and tagged Audru, Estonia, guinness world record, Hoghland, hokey pokey, Poughkeepsie, toe dance folk jig, walkway over the Hudson. Bookmark the permalink.